Tink. Frog. Rip out and start over. 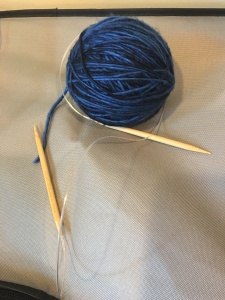 I had to undo several weeks of knitting last night. Every pattern for something knit in the round tells you to be very careful before joining the knitting in a circle. If you have just one twisted stitch, it will turn your smooth round piece into a disastrous twisted curly-cue.

It took me four inches of knitting to realize that what was going on. It took me ten minutes to undo it. It’s called “tinking” (“tink” is, cleverly, “knit” backwards). It’s also called “frogging” because you “rip it” (i.e. “ribbit”) out.

It’s brutal and starting over is often the only solution.

Our dog, the genius, was skunked last week. This week he got bit in the face by another dog and now sports some pretty natty neon pink stitches which stand out in 1984 contrast to his beautiful black fur. He’s fine, and after one wobbly night due to the sedative, he’s back to normal, which means continued participation in and occasional leadership of shenanigans.

I killed our washing machine. I am doing survival loads in the sinks and tubs and then running them down to the dryer. My sister-in-law has been wonderful about letting us do a few gigantic loads at her house (I will not break her machine, promise!). I always say I want to travel more, I just should have specified that laundry should not be involved.

My kids are really into “My Singing Monsters” and are inputting variations on Hot Cross Buns. It is something other than pleasant, and I assume that having them blast it on repeat for hours will cause my brains to liquefy and leak out of my ears. Perhaps the gooey brain-stuff can then be used to ice hot cross buns, wrapping all of this up in a lovely bow.

Although late-night antics here are not new, they are getting more creative. The other night the kids held a post-get-into-bed-I-mean-it rally for the dog. They made signs and paraded through the living room. The dog joined in, giddy. 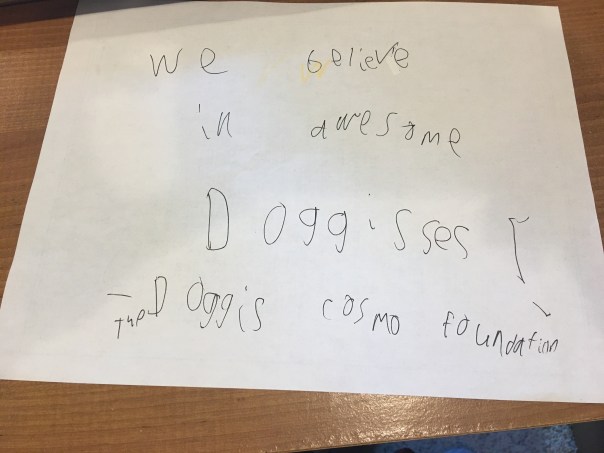 The sign reads “We Believe in Awesome Doggisses – The Doggis Cosmo Foundation.”

They did not have the proper permit, and I’m pretty sure it’s spelled “Doggus” but I’ll have to check with Gollum/Sméagol.

The next day, my daughter decided to rank family members in order of who she loves best. I got ranked after the dead dog.

Tink. Frog. Rip out and start over.