Everything they say about Labs is true.

I now call him Dogus, as does most of the family, and since he doesn’t respond to any name, nor to most commands, nor to squeaky toys, it’s purely for my own amusement.

In the last four weeks, he’s eaten my daughter’s birthday cake, an entire loaf of bread, two blueberry English muffins, a bag of potato chips, two donuts (and the box), and…

half of a raspberry danish.

Cosmo loves his carbs, that’s for sure.

He’s run away to make friends in the neighborhood, using his powerful cranium to wedge the door open just enough when we open it a crack to slither our way outside or in. He, unlike our last dog, does not respond to whistles or calls or entreatments. We’ve learned he will return home if we run alongside him, challenging him to a race. Our cardio health is now spectacular.

In one day he performed the hat-trick of pooping, peeing, and barfing on the rug within 30 minutes. Our house is largely hardwood floor or tile, so he found the two square feet of rug in the home and desecrated it.

He jumps up, he nuzzles, he is constantly underfoot.

When my husband is outside, he whines and whimpers and jumps at the windows, wanting desperately to join in whatever mulching fun is happening.

He wants 24/7 attention and cuddles and play. He mouths our wrists, he stretches out and takes up the entire couch. He wants snuggles, scratches, and everyone’s socks.

And oh, the gas this beast emits.

All we knew is that he was 18 months and from Alabama (I wanted to name him Banjo, as he is a 60-pound lap dog, but we all know how the naming worked.)

A few days ago, we got an alert from the chip system that said our dog had been found, which was weird because when we got it, the dog was at Charlie’s feet. Or on them.

Charlie called the number of the “finder” – and we got quite a story.

Turns out Cosmo is a ppurebred English Lab. He comes from pedigree, highly decorated stock. This dog is damned royalty. He was adopted and, likely, left out in a yard by its owner for a year. After a year, despite the breeder having a no-questions-asked return policy, the owner let the dog run away, and when the dog was found, the previous owner did not claim him (they found the owner via the chip). The Alabama shelter sent Cosmo up north. And here he is. We’re getting his papers sent to us.

Still, he is incorrigible. Still, he is two years old and only knew “sit.” Still, he is underfoot, has puppy crazies, is a flight risk, steals food, and thinks the couch is his and his alone.

And we love him. Every naughty Lab inch of him. 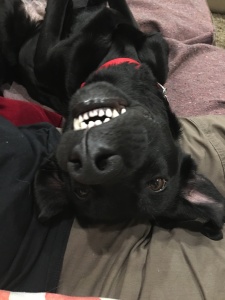 1 thought on “We’re Not the Bloodhound Gang, But There’s Trouble and We’re There on the Double”