Summer break, where we again rush in where angels and folks with common sense fear to tread.

The kids have been out of school for ten days. In that time we’ve had one piano recital, three library visits, fifteen thousand baseball games/practices, and 2.4 million snacks. One or more children and/or pets have woken up during the 5:00 hour each day. School anxiety for next September hit already, and it’s too flipping cold here in Chicago (a balmy 62 degrees at the moment) to go swimming or even play outside — and yeah, it was too cold for baseball, but that never really matters, does it?

We made cake pops the other day because while trawling for snacks, one child came upon a container of edible eyeballs. Bargains were struck. Messes were made.

Which is all to say that we’ve scratched “Bake with mom” off the to-do list for the next ten years. I’m still trying to get the cake batter off of the dog.

There is much fun to be had still. Camp starts today and the kids go for about three hours before they come home and report how bored they are for the remaining 21 hours a day. I shall cling to those three hours like Leonardo to that door at the end of Titanic, likely with similar results.

Until next time, keep an eye out for all the fun! 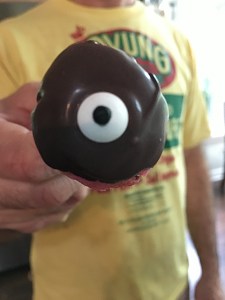