Do you know who sang that lyric in the blog title? Answer at the end…

Oh, November. It’s been a long time since turning the calendar page felt like such a satisfying act of closure. So good.

Work in November centered largely around NaNoWriMo and my novel, a felicitous overlap if ever there was one. More on that on Monday with my regular weekly post, but suffice it to say I hit 50,000 in the novel with an additional 6500 words on other projects.

November is a month of squeezing. The good kind and the scheduling kind. I dislike the scheduling kind, as it simply feels like we’re racing on a hamster wheel and too many other forces are spinning the wheel for us, making it go too fast to even jump off and nothing seems to get tended to completely: work, family, friends, self, laundry, floors.

Yet now, on December 1st, as the rain mixes with the snow, turning snow into something snow-like, but not snow and not slush and not (yet) ice, it is quiet and calm. That’s been missing. There’s been stress, of course, but also joyous movement. We hosted Thanksgiving, and the children are now old enough to be more helpful than in the way…or at least to know to get out of the way. Each made something for the table – the youngest a beautiful tray of brownies (8 ways!), the middle a gloriously homey and perfectly spiced apple cobbler that pairs wonderfully with cinnamon ice cream, and the eldest a from-scratch pumpkin pie (one with a secret ingredient, even) decorated with candied cranberries and some cut outs made from extra pie crust. And of course, because he’s ten, he had to go extra on the decorations, but, fine. 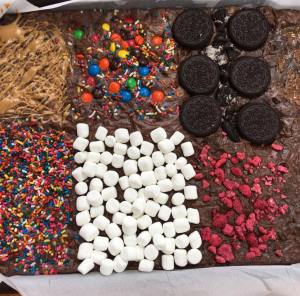 (FYI: I call the twins middle and eldest because, despite the ninety-second lapse between them, they still stubbornly cling to birth order traits.)

This morning is the first since school started that we’re not in prep mode or in response mode or in recovery mode. We’re just here. I’m working, but that’s my happy place. My husband is hanging decorations. The rain is preventing the toxic noise from the local skeet shooting range, so there is something akin to peace, for now. That will end when the twins practice their trombone and trumpet later, attracting moose to the yard.

I do not wish to spend all of December so busy looking ahead and making plans that I miss all the good stuff, which will mean fighting every instinct I have to hurry up and cram LIVING (all caps) into every moment. I need to continue to say no to things (which, in 2018, I truly committed to and it feels flipping fantastic) and to try to approach with something akin to repose all the yanking, especially kids’ school stuff and activities. Those are the sacrifices. I’m sure the old chestnut will come true that by slowing down I will do much more.

Except for the floors. Those I choose to let lapse until we move.

So – blow out the candles and have a piece of cake – from this song:

November saw me turning another year older (yeah, yeah, yeah, better than the alternative, thank you). It was the best one I’ve had in years. It was intimate and small and filled with onion rings and the good kind of squeezing. This year may just turn out to be my best yet.