I do most of my prewriting by hand, and much of my work this week involved exploring the concept of “death” – which I keep adding the letter “l” to and writing as dealth. I looked up “dealth” and learned it is an obsolete word meaning “a share dealt out.”

Obsolete words are such a romantic thing, reinforcing the idea of language being a living thing. The word “obsolete” itself was the first vocabulary word-of-the-day (we called them “Super Words”) we had back in sixth grade. Tip of the hat to Mrs. Proctor, and no, I don’t remember what the other 179 words were.

Which is all just to say that I fell down a few rabbit holes this week.

We are in Week Four of Bubonic Illness here in the house. My husband has bronchitis, the kids still are in various stages of cough and misery, and I want to become one with the couch. But there’s life to be lived, and school functions (so many already) and school forms and we’re still transitioning into routines for the school year and I need to find a new piano teacher and my kids former piano teacher uses a pretty unusual method and I’m worried that transitioning to a new teacher will be a steaming pile of frustration for the kids and the teacher and for me and this was also a week where one kid didn’t like anything on the school lunch menu and didn’t want to get the alternative bagel and cream cheese every day for a week so there were lunches to be packed on top of everything else and I had zero good hair days.

I look like I’m participating in the wig trial runs for Hocus Pocus.

I allowed myself to veer greatly off the path of my extremely precise pre-writing schedule because something just…wasn’t working. I wasn’t able to give four-page summaries of my book plot because I just couldn’t get past certain images, certain snags, and certain giant chasms where plot or story or even a fricking concept should be. 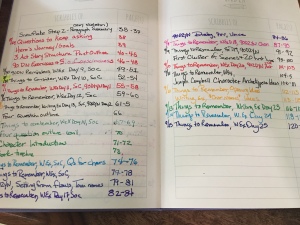 After a few moments (days) of panic, I stepped back to holding everything lightly and with curiosity. I know three things:

So I write for me. I may be a supremely narrow market niche, but I know what I like. The reality is that OUT THERE are readers who have a similar aesthetic and who will enjoy what I put out there. I’ll edit and rewrite for them.

There is a reason that so many writers, including but not limited to the prolific Stephen King, advise to write the first draft for no longer than a season/three months (which is why I will begin writing in October with a December 31 deadline). It’s awfully easy to talk your own work into a giant ash pile of burning toxicity before getting to the second page. But if you’re working to meet a deadline of eighty to one hundred thousand words in three months, there’s not a hell of a lot of space left in your brain to worry about anything else.

I’m getting the self-doubt out of the way before I start typing. That’s the real genius of planning ahead, even when, like this week, the planning has largely been thinking of terrible ideas and discarding them. I am figuring out All the Things That Don’t Work with a nice side dish of Holy Crap Can I do This? (That’s on special this week.)

This past week I:

I had a wonderful piece of news earlier this week that a humor piece I wrote won honorable mention in the Royal Nonesuch Humor Writing Contest sponsored by the good people over at the Mark Twain House. I wanted to write something that pings the funny bone on several levels. I was thrilled to have done well, thrilled that Michael Ian Black, one of my favorite writers and podcasters and people I have never met read my piece and considered it pretty ok.

Part of this amazing event is being reminded that the most rewarding part of having a piece of writing published is having it read, getting feedback. I have some messages and emails that I will cherish. It was a good reminder that the best support I can give other artists is to write reviews, write comments, see shows, buy the book, click the link.

It’s all a part of showing up and it’s the Real Dealth.

1 thought on “The Real Dealth, Bad Hair Weeks, and MIB”