The weather much of the past week was a horrible cross between science experiment and cruel joke. The air was warm and pudding-thick, testing my deodorant, the sticking power of my SPF (huge, drippy fail as far as my eyeballs are concerned), and the boundaries of my hair. On the Fourth of July, I applied for an emergency follicular zoning permit.

If you were in the northern hemisphere on the planet Earth this past week, you know what I’m talking about.

We swam, sweat, and showered at impressive rates. I now just take towels out of the dryer and immediately put them back into the washing machine, thereby avoiding the middleman.

Most days, we sought relief where we could. Pools, basements, underground burrows. We tried to avoid getting in the car. Entering in a car on a hot day before the oven air escapes is unpleasant.

Not more unpleasant than the two baseball games my boys had, though. I’m not entirely sure how they escaped getting some off-brand fungal infection from playing in 100° heat indices while wearing polyester clothing and tight caps. But escape fungal infection we did. #blessed.

I’m not sure if it’s the heat or the fact that we really haven’t stopped since April, but we are exhausted. If you are familiar with the rituals of the American End of School Year, you know the frenetic pace of the last 4-9 weeks of school. My children are beat. They lack “kid energy,” and I’m not sure why. Maybe they used it all up as babies when they never, ever slept. We’re all dragging ass these days.

Even my slow cooker refuses to put in the effort. I get it. We’ve been subsisting on quesadillas, microwave burritos, and those snack packs of cheese and nuts. My kids will probably look back on this is the greatest eating summer of their life.

We rallied on the Fourth of July. It was a difficult day for me; I fear this country’s foundation is being tested, and I’m worried about outcomes. But there were bouncy houses, and child enjoyment of those, while not specifically mentioned in the Constitution, probably fall under the Ninth Amendment. However, I am still me, so I fretted over how much my kids were eating and then bouncing when the heat index rivaled that of the Earth’s core. Fortunately, we were incident free. I’ll bounce to that.

There were a lot of mosquitoes. Two of my three children inherited whatever pheromone it is I have that attracts mosquitoes and gives us giant welts wherever we get bitten, which tends to be our foreheads and knuckles. Because I am special, I also got a nice constellation of whoppers on my groin. Not sure why those bugs were flying up my skirt, but I guess that’s in the Constitution as well – I have no expectation of privacy from mosquitos (or assholes with cameras ), but those are not exactly bites I want to scratch in front of my in-laws, our gracious hosts for the evening. 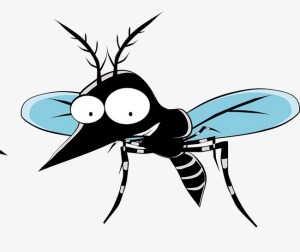 Fortunately, I’m distracted from my bug bites because I also got nailed in the foot by an errant golf ball at the course where we were watching fireworks. We got there early enough to get good seats and some people were still playing golf in the twilight. I have a delightful bruise on my foot which, thematically enough, is almost the exact same shades of red and blue as Old Glory.

Fireworks save the day as they almost always do, and the look on my kids faces as they stared at the heavens hopeful and in wonderment, put my cynicism on hold — at least until “I’m Proud to be an American” came over the speakers. That song drives me batty. I felt better when the conclusion of the firework show was set to the 1812 Overture.

I’ve decided to let the kids play DJ (not like this) while we prep dinner. Usually that’s a stressful time because everyone is bouncing around. During the school year it’s when the kids lay out their clothes and paperwork, pack snacks and lunches, make the dog nuts, and gripe about everything that’s gone wrong in their lives since conception. Or they talk to me, which is fantastic when I’m trying to follow a recipe keep them from having “appetizers,” which is really them just eating dinner and then rejecting whatever it is I am making.

I hand them my iPod and we all take turns picking a song. The other day, I suffered through some One Direction and whoever sings “All About that Bass,” took a much-needed dance break during “Happy” (as is also in the Constitution) and finally, when it was my turn to pick, I introduced them to a classic. One child was unimpressed with the intro (“Are they just going to spell stuff slowly for the whole song?”) but by the time it picked up, they were sold.

And so I leave you with the same song. May your dinner prep be tuneful and the things that bug you stay away from your forehead, knuckles, and groin.

This is the first time he’s ever hung out in my office. Usually he hangs with my husband or chills with me on the couch.
Loading Comments...
%d bloggers like this: