This past week, we went from 3000 degrees to 4 degrees in the span of a couple days, which meant storms, dreary weather, and cooped-up children who, in such situations, see me as the in-house entertainment director.

Add to this off-the-charts pollen counts and two mouths getting wired up — one with top braces (bottoms next week) and the other with a maintainer (an appliance I’ve never heard of).

You can imagine the good cheer at Casa de Pick. GOOD CHEER AND NOT ONE COMPLAINT.

Camp started and, because it’s camp, the children are enjoying themselves. Summer camp has changed a lot since I was a bonny lass. Back then, we played variations of “stand in a circle and do something involving pointing at/throwing a ball to someone else in the circle.” Sometimes instead of a circle, it was two lines. Always we were mosquito buffets.

Now though, summer camp is high-tech, specific, engaging, staffed by people who (a) know what they’re doing and (b) like children. This part of the summer, my kids are only going for half a day, (which, once we factor in drive times, gives me about 2 hours a day of quiet, assuming the suburb I live in hasn’t decided it’s Synchronized Tree Trimming Day.) The kids come home with tales of archery and running through sprinklers and computer animation and…detonating things, probably (to be fair, at this point I’m not fully paying attention. Or, more correctly, I’m trying to but they’re all talking at me simultaneously while trying to help make their lunches, so there’s a lot of damage control going on.)

So, of course, they’ve started asking if they have to go to camp every day.

We’ve had some real adventures in orthodontics this week. As I reported last week, we’ve begun the process of moving teeth and bone in the boys’ heads. One twin lost a spacer band within 24 hours. The other was miserable for 48 hours after a gnarly tooth extraction. We spent most of last Saturday watching the first two Hunger Games movies, and they cuddled with me, which tells me they weren’t feeling themselves at all.

Last night, hours after receiving the actual braces, one of the boys’ wire popped loose and stuck out of his mouth. He looked like an extra in the next Suicide Squad movie. Not that I’d ever let him consider doing that. I’m on to you, Jared Leto.

Father’s Day was less than a week ago, but with the pace of life and news, I think we’ve all aged about five years since then. Like many Americans, we spent much of Father’s Day honoring the caveman in all of us. There was much meat and accompanying expressions of schmoop.

The biggest discovery of the week? Socks.

Which, I think, is going to be a theme for the summer. 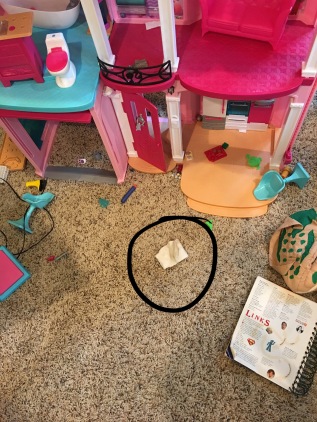 Barbie’s Dream House does not have a laundry room.

One sock carefully lobbed under the computer monitor