I recognize this person, even though I’ve never seen her before. She’s harried. She’s got too much to do and this particular task probably took longer than she’d anticipated. Now she’s stuck in a pokey checkout line here at a local craft store.

I can feel this poor woman’s rage and helplessness and her to-do list beating out of her chest. I get it. We all do.

It’s the first week of September, and whether you’re a parent celebrating some extra time, or you’re a parent saddened by the end of summer, or you don’t even have kids, this week marks the return of Hurry Up and Get It Done. No more Flex Fridays. No more lazing. Work and school have been waiting impatiently for the day after Labor Day to unload all the things we need to do immediately.

There is a sense that if we do not get organized, we will be chasing after our own lives until winter break.

Not-so-much-a-spoiler-alert: we will never get things completely under control.

Wednesday was the second day of school. We’re all unmoored, exhausted from new routines, and expending excessive amounts of emotional and physical energy figuring out and living the New Regular.

My daughter started kindergarten and has been understandably needing extra nurturing at home. Her kindergarten eases the kids into a long day by starting the year having the students attend for a few hours, then after a few weeks, they add another hour, then another. Right now, there are almost four hours a day it is just me and her, before her brothers come home. She needs and wants my attention, and I force myself to put away my list of All the Things I Wanted to Do Once School Started.

For a week, I’ve been promising to take her to the craft store to find some after-school before-brothers-come-home activities. It was about the last thing I wanted to do between meetings, deadlines, and the ever-growing piles of laundry that similarly begged for my attention.

Then there’s that exhaustion thing that never seems to fully disappear, the sum of running around, absorbing all the nervous energy of the house, plus too many nights of poor sleep.

Unsurprisingly, we spent a happy hour there wandering the shelves, picking out stickers and barrette-making kits. Still, it took effort to stay focused on being with my daughter, being there, holding space as she  processed all the new in her world. I just wanted to zone out and stare at Washi tape for awhile.

We wound our way to checkout line after  45 minutes of giggling and smelling scented candles and avoiding the scary Halloween aisles. There’d been some yesses (stickers!) and some nos (happy cloud rainbow pillow), and a lot of marveling.

We were both ready to go, and we waited out the customers ahead of us. Checking out is never a fast process at this particular store, and there were some customers who had coupons, some who had questions, and others who were genetically part-sloth.

My daughter kept asking for candy (no), then tried to convince me the that Cheez-Its in the candy display are not candy (true) and could she have some (no). We looked at the wreaths hanging on the wall. We told terrible jokes to each other. She booped my nose a few times and each time I made a sound just to get her to laugh and distract her from her own exhaustion.

So, yes, it was slow. While my heart beat in rhythm with the woman huffing and puffing behind me, I could not take in her stress, because mine is at peak right now. I didn’t want to commiserate. I didn’t want to bond. I just wanted to practice patience. I smiled as sympathetically at her as I could and turned back to my daughter, who brought my attention to the erasers shaped like lollipops.

“Have you ever seen anything like that?” she marveled, and I loved her so at that moment.

Spent — utterly, totally, bone-achingly spent — we finally got called over to Register 5. It was only after I put our little items on the counter that I realized I’d left my wallet at home.

I rarely remove my wallet from my purse and had only done so earlier in order to order some groceries online, a desperate effort to gain some control in my life, to steal a few precious moments, to perhaps sit a little bit.

The cashier, also overwhelmed, looked over all the items on the counter. “Ok.” She started moving the items to a different cart.

“I’m so sorry. We can put them back.” I glanced at my daughter, whose little brows knit, and I squeezed her little hand to let her know I would explain in a moment.

“What’s going on?” my daughter asked. “Are we getting our stuff?”

I steered the cart out the door. “No, baby. I forgot my wallet, which means I don’t have any way to pay.”

My tears stung hot, not because of the wallet, not because my daughter didn’t get a $5 crafting kit, but because I knew I was on overload. Too many meetings, too many worries, too many obligations, too many calendar spaces filling up too quickly, too many tears wiped, too many “this will just take a second” items.

Was I? No. I was split open, flattened, put to the fire.

She started laughing, having never heard that fabulous word with all of its hard consonants.

“We had fun, didn’t we?” I asked her as we sped home to make sure we were home in time to greet her brothers after school.

Epilogue: I went back to the craft store alone that evening but to undertake my weekly Artist Date — an essential part of living a creative life that is all-too-often the first thing I cancel when life gets busy. I stared endlessly at Washi Tape. I did not zip through the aisles as fast as possible. I recreated our morning, putting the items we had delighted in into the cart, plus a few small things for myself. It was a peaceful rewind.

30 minutes I left the store refreshed and re-energized. I looked up to see this: 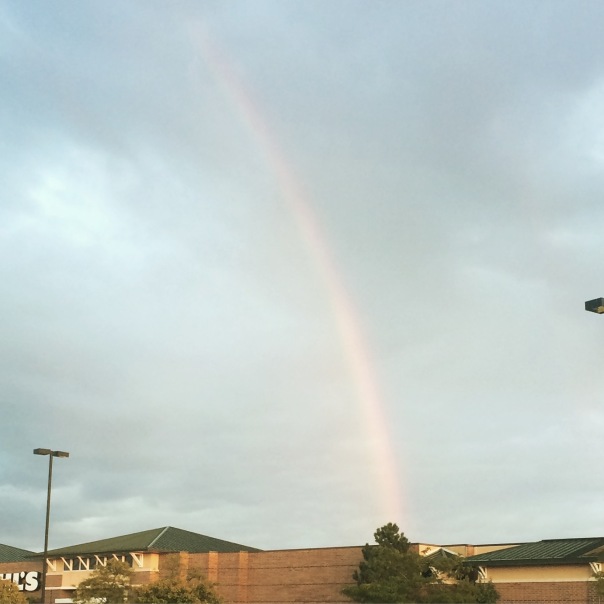 It was a symbol of a promise of a different sort — one from myself to myself.

2 thoughts on “Promises Made, Promises Kept”