Day 4 – Feeding the children was a little sporty today. Scoured the depths of the pantry for lunches, because I haven’t grocery shopped out of fear of wrangling three kids in the cereal aisle. Told kids that Triscuits and cheese is too a continental lunch treat!

Kids started an art installation called Band-Aids A-plenty. It’s cool and magical because every day I find 6000 wrappers and used bandages that I pick up and throw away and then they reappear the next day. I think it’s a commentary about the fragility of life and how we also need to take care of our planet.

New word — bouleversé, which is apparently French for summer break.

Day 5 — Heard the children excitedly working together on something in hush-hush tones. This tends to set off warning systems in any mother’s head, so I peeked in to see them going under furniture and through bags searching for coins. I oh-so-casually mentioned that if they happened to find anything that needed to be thrown out/donated they should do that, because I’m hopeful and apparently never met a child before. YET — after thirty minutes they had made a donation pile and thrown away some nasty stuff that had been lodged in various crannies. I dub this day the Feast of the Under Bed Miracles.

Day 6 – For several hours, kids played catch with the Magic 8 Ball. In the middle of the playing field was a giant tom-tom drum that somebody who is no longer welcome in my house gifted to us. Constant drumming remniscent of an approaching army let me know that my children need lots of practice catching balls, Magic 8 or otherwise.

Added Excedrin to my shopping list, should I survive all this fun long enough to make it to the store.

Day 7 – Let the kids have some ice cream on the front porch/driveway. When I joined them about 10 minutes later with a spoon I notice there was some Vanilla Chocolate Chip that had melted on a plate they left in the sun. Fortunately my kids love me enough to stop me from eating what was actually quite accurately-deposited bird poop. 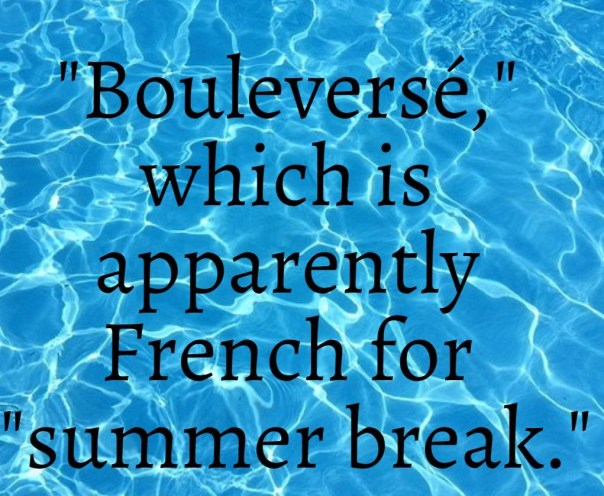 Day 8  – Child saw hummingbird at the feeder and other two thundered over to the window like a herd of wildebeests. Many tears were then shed that the hummingbird flew away. I spend the afternoon writing bad poetry about being a hummingbird.

Day 9 – Took the family to the pool, an exercise in watching the kids flail about pointlessly in the water while screaming at me to watch. For some reason, all of the men and boys at the pool started competing to see who could do the splashiest jumps off the diving board to their own amusement and to the second-hand embarrassment of everyone else there. My husband stopped after he, and I quote, “broke his butt.” He limped over to a deck chair and we both watched in horror as our clumsiest child, who’s never met a surface he couldn’t impale himself on, slipped as he went down the length of the diving board, slicing a quarter-sized piece of skin off his thigh, thus ending the first pool visit of the season much like we ended the last pool visit of last season. Fortunately, it only took 45 minutes to get the kids from the pool to the car 100 feet away, as they were “freezing” and “so cold” on this 95-degree day. Injured child limped bravely and not-at-all dramatically toward the car. I asked if he wanted to see a doctor or if he wanted to go home and get a snack. Snacks won the day, as they usually do.

Day 10 – Waking up now means getting a medical report on accumulated bug bites, including size and itchiness level. Also got an update on the diving board wound, and a slide show presentation of how said wound had bled into the bandage and then started to scab up. You can all look forward to those photos in this year’s holiday card.

Day 11 – The kids entertained themselves by trying to figure out a song on the piano. I know that sounds great on the surface – they’re being creative and they’re problem-solving — but it’s a trial and error process that involves banging out the part they’ve already mastered, then hitting every wrong note until they finally arrive on the correct one, and then starting over and getting it wrong, and finally starting over again and getting it right but then having to figure out the next note.

Went to the library, which is a place I always called the amusement park until they learned how to read (which I suppose is my fault for taking them to the library). Shout out to the tween next to me at the new junior high fiction section who intently picked at a massive scab he had on his arm. At least I know my gag reflex is fine.