I prepped a lot before diving into writing the first draft of a novel,  have just enough self-awareness to know what advice will work for me.

One piece of advice that I read that that is now sacrosanct is to keep snacks handy and in abundance.

Before starting the book last Sunday, I bought a bag of Cheddar Sun Chips. Full name: Harvest Cheddar, which makes me slightly ragey. While there is a harvest cheese (which is not cheddar), and one can harvest cheese cultures to make artisanal cheese, I’m fairly certain the good people at Sun Chips are using some sort of crappy, delicious powdered cheddar-type product aged in a test tube. 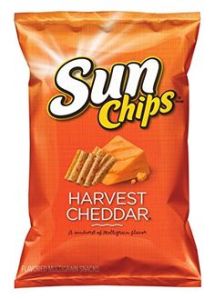 Point being, Sun Chips are delicious.

My kids agree, and each regarded the chips in the pantry with curiosity, planning when they would partake of the chips, and deciding on lunch the next day.

By start of same-said lunch, the bag was only a quarter full, and the pile-on began.

I recognized the tone because it was exactly the one I use when someone has eaten my Sun Chips, I know exactly who has done it, and am ready to squeeze a confession out of the culprit with feigned ignorance and legitimate snack-deprived outrage.

“You ate the whole bag this morning?” I detected glee in their voices.

“No, I ate three-quarters of the bag this morning.” I didn’t bother explaining how the junk that satellites the writing process, namely various fears and self-loathing, is quelled by crunchy snacks.

“Isn’t that bad for you?” they asked.

“Wait, what about the chips still in the bag?”

“Also mine.” I am nothing if not maternal.

The lesson? In this house, we earn our poorly named Harvest Cheddar Sun Chips.

A surprising thing happened the other night. A family member who I like and respect, and who happens to be an outstanding author, came up to me and asked, “Are you really writing a novel?” and my first reaction was, “Nah, not really.”  Because at this point it doesn’t feel like I’m writing one, even though I have some words written, notes, plans, schedules, and, obviously, snacks.

Maybe because it won’t feel like I’m writing a novel until I’ve written one, which is some top-level bullshit right there.

The real advice I cling to, aside from snacks, is that writing is the best-worst way to learn about yourself. Apparently, I do not feel like I’m writing a novel at this point, or at least that I shouldn’t admit it. (Yes, yes, I write all about it here. I never said I was consistent.)

Maybe I’m not confident in the story yet, despite being confident in my process, with its bald intimacy and delicious contradictions of personal and private.

Whatever it is, I can certainly see myself spending too much time moodling about “At what point do I say I’m writing a novel if I’m actually… you know…working every day on it?” and not enough time writing the thing.  Such is my brain. It delights if I scratch the nerd itch, and I need to scratch the writing itch first.

I also am sure that this family member would understand more than anyone else why I’m not tattooing “novelist” on my face quite yet.

So, about that first draft…

10, 350 words so far. Most of them will eventually be forced into early retirement, put into a barrel to age into something better, or harangued into submission.

In many ways, it’s a draft/outline/notes-to-self Frankenstein mashup. The stitching is sloppy and the parts don’t all go together, but that’s what editing is for.

For now, I let myself be surprised, curious, and as non-judgemental as is possible with this sort of thing. (i.e. I pull on my Zen pants) knowing how much heavy lifting the editing process will entail.

I wrote a great first line – for a different story. Or maybe I started the wrong story. I’m taking that as a victory.

Three days worth of writing felt like a bad workout: You know it’s not doing any good and you’re just doing it to keep up momentum. I was throwing wet sticky noodles at the page. It seems a little early for that feeling in the process, but I’ll figure out what the beginning and middle of the book should be by the end!

Right now, I’m laying tracks. It’s fun, minus the fear and its spider babies that scatter quickly in the wind…problematic when the wind blows in your face.

She follows that up with, “And now here’s me saying peach twenty times in a row.”

So, you know, if there are random peaches in this story (or if it turns out to be the pits) you’ll know why.

1 thought on “Scratching the Nerd Itch, or The One Where I Talk About Cheese Harvesting”